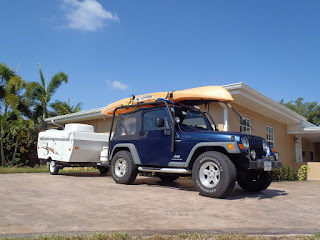 Day 1: On the way out of town I had to stop at a local gas station to change the ball on the hitch for the right size one, and after I was done doing that, the owner of the station was very curious about the set-up and my solo trip, it didn't seem too normal that I was going alone, but he was very friendly, and enthusiatic about it.

The drive down was nice, althou the first 25-30 miles were a little "different" as it's been a while since I've towed the camper. 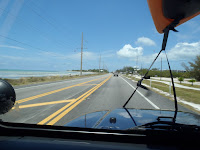 On the highway there were waves, smiles, and thumbs up from passing by motorists, as well as a police officer. Most people looked very curious, and once they realized it was just me in the jeep, they seemed to be "cheerful", not the usual south florida drive. 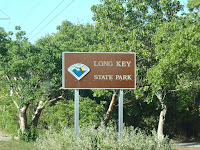 At the state park I was greeted by two very helpfull Park Rangers, that were very helpful and knew everything from good fishing spots (which turns out is most if not all of the island), to where to grab a bite to eat with the locals.

As faith would have it, once at my campsite the electric winch that would lift the pop-up camper for me would not work. However the "digital" system work fine, a little slow, but fine. 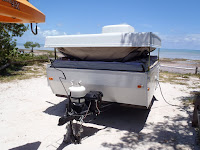 Finally Breakfast around 3:oo in the afternoon, at Grassy Key. A place called The Wreck and Galley Grill, a "local's mostly" looking place, with a very keys look to it. The food was very good, and the people that worked there better, a friendly welcoming crew thart made you feel like a local, or an old friend and would be a blessing in disguisse since I'd ended up sitting there for a little over an hour due to a traffic accident on MM 70, and since it's a two lane road, that means, sitting around until clean up is done. 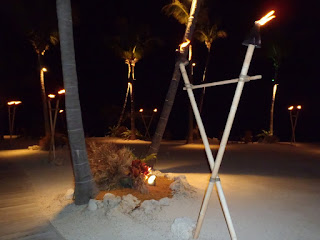 Dinner was had a Isla Morada Fish Co. and followed by a movie at "Camp Gio". 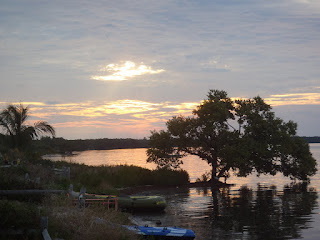 Day 2: The morning seem perfect for some kayak fishing, and the tide was going to be changing at what seemed the perfect time too. With kayak geared up I headed out to try my luck and find some snapper, red fish, or even bone fish among the many species that inhabit this area. After 2 and half hours of no luck, 2 charter boats of having no luck either, and the temperature and humidity rising to nearly unbearable levels it was time to call it a day, on the water at least. 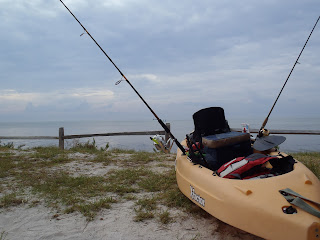 Lunch was at Isla Morada Fish Co. followed by an afternoon of "hiding" from the sun and heat in my camper watching a movie and a drinking a cold beer. After the sun started heading down the outdoors called on me again, and the view from the campsite needed to be enjoyed once more. I met the neighboohrs on both sides of my campsite, we had a few beers, and talked for a little while.
That night was a little "camp made" dinner and off to bed. 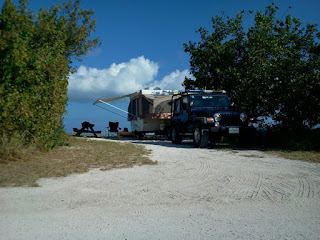 Day 3: Woke up and realized that while most of my packing was done very well, the food list hadn't been revised before leaving the house, so off the convenince store it was for some ground coffee, and eggs to make breakfast with. After breakfast was done I had been wanting to go hiking in the park since I first heard about it. A not so long walk from my campsite lead me to the trail entrance, which I guess could have been done in less time, but there was so much wild life and backcountry scenery to see that it seemed to take forever. Once at the entrance of The Orb Trail the heavy tree canopy gave a refreshing shady path an inviting feel, however the ranger's words kept me looking around for water moccassin snakes around the brush, and fallen branches. There also seemed to be alot of wasps flying around and as I got closer to the first mile marker in the trail they seemed to increase in both size and numbers. I reached a small bridge and there it was mile marker 1, and 50 feet or so after what at first appeared to be a group of flies covering the path of the trail. Upon closer inspection I quickly realized that it wasn't flies, but wasps, over their nest. 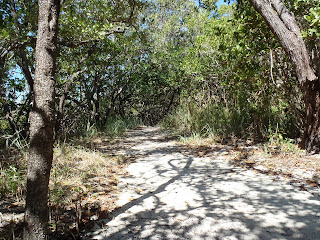 I decided to just walked back and enjoy another trail within the park, and that led to a hike to the southern most part of the island on what became a somewhat desolated beach, with some private beach houses, and docks along the way. Some of the homes looked like they belonged on post cards for the keys. 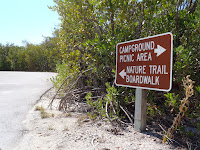 On the walk back I noticed the oddest thing, mine were the only footprints for miles. By the time I made it back to camp it was already too hot, and time to stay in until the sun began setting again. 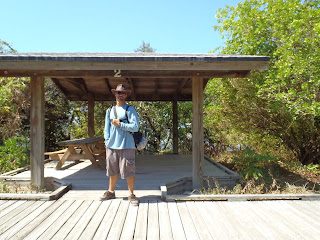 being my last full day there I wanted to try my luck with the fish one last time (for the time being), so I casted a line out and let the fishing rod sit against the fence on my site, and proceeded to relax, have dinner and a couple of beers. All along one could hear the fish in the water less than 20 feet away, and I jokingly said "with my luck my bait it's been long gone by now" and laughed. Little did I know that I had a surprise on the line waiting for me to pick it out, a 20" Red fish. 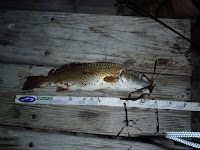 It has been said a million times that "there is no place like the Florida Keys", and after spending four days there mostly by myself it became clear to me why so many have drifted there time and time again.
Posted by Gio at 11:22 AM 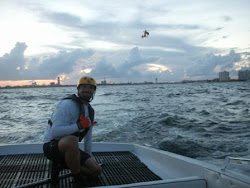